The museum was called this morning for a Bigfoot sighting early this morning January 6th, 2016 in Littleton N.C. on Moore St within walking distance from the museum.

Witness Tifanie (last name redacted) reported “When I looked out the window I saw a large upright black bigfoot type creature with long black hair” walking through a trail in the woods behind her home, it was close enough that she could hear the branches being crushed as the creature passed.
As per Tifanie, the bigfoot was moving very quickly northwards in woods west of Moore St. She states it was too large to be a human and it definitely was not a bear.

While we were on the phone with Tifanie she spotted a dog walking along the same game trail behind her property. The dog appeared to be following a scent as it traveled in the same direction the creature had earlier. Our investigation did not uncover any footprints, as the ground was all leaf litter, though there were places where the brush and leaf litter was crushed as if by large feet. Also, there were broken branches at the witnessed height of the creature. 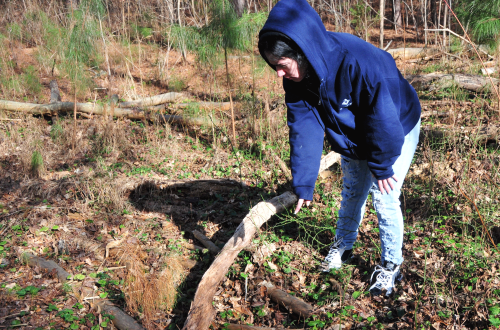 Depressions and crushed plants along the game trail.

Recently broken branch along the game trail behind Tifanie’s house.